We spent two weeks in the vibrant city of “Nuestra Señora de los Buenos Aires”. We were fancying this destination and we left delighted at the end our stay. We would like to share with our impressions on this wonderful city. 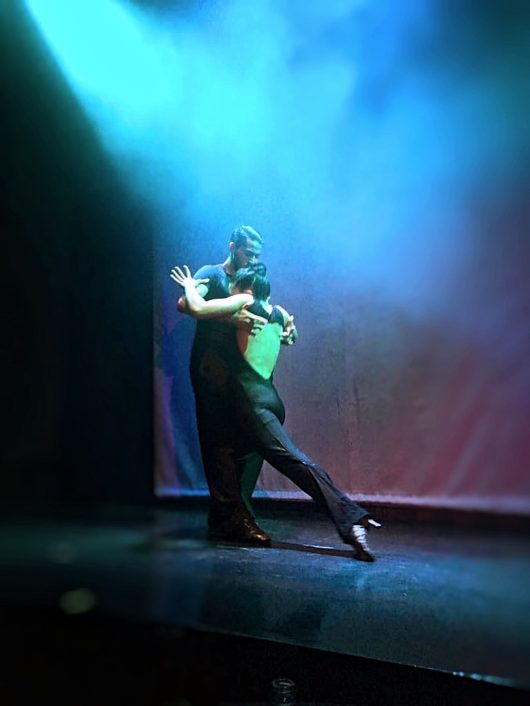 Argentina is synonym of Tango. This dance emerged at the very end of the 18th Century and was initiated in the lower-class districts at the border of Argentina and Uruguay. Its essence has been nurtured by former slaves ceremony dances but shaped its roots from the European immigrants influence. Nowadays Tango is still very strongly rooted into Argentinian society and culture. One of the most representative event is the “Milonga”. It refers to one of the musical genre of tango, but it is also a social event where people meet to dance. It takes place any day of the week and starts with tango classes followed by a show. People go there any day from late afternoon to very late in the night. A very easy way to find one Milonga close to where you are staying is to check “Hoy Milonga“. We took part in one of them and our teachers were very much into Tango. You could feel how serious and committed they were about their art and how they wanted to transmit more the culture rather than a perfect dance technique. We stayed after the class and could obverse the pre-dance show when anyone could go dancing. Young dancers with older ones, several nationalities, origins…. It was a melting pot of Argentinian society meeting up around the most emblematic art of the Argentinian culture.

Argentina is also synonym of gastronomy and more specifically its legendary meat quality. Argentina (south part specially) is a wild land covered by green grass and pure air. It is no surprise then that the meat production would be one of the most qualitative. The best way to enjoy it, is to go to a parrilla restaurant where they will offer you all the best cuts of the meat grilled and served with the typical “chimichurri” sauce and a free buffet of salads. From the fanciest to the more humble spots, the parrillas are delicious and incomparable with any other meat quality. Another emblematic Argentinian specialty are the empanadas. As in France you would find “croissants” at any corner, in Argentina you will find empanadas EVERYWHERE. Not all of them are as tasty as they look, so you should better try one first before committing to buy a bunch of it. 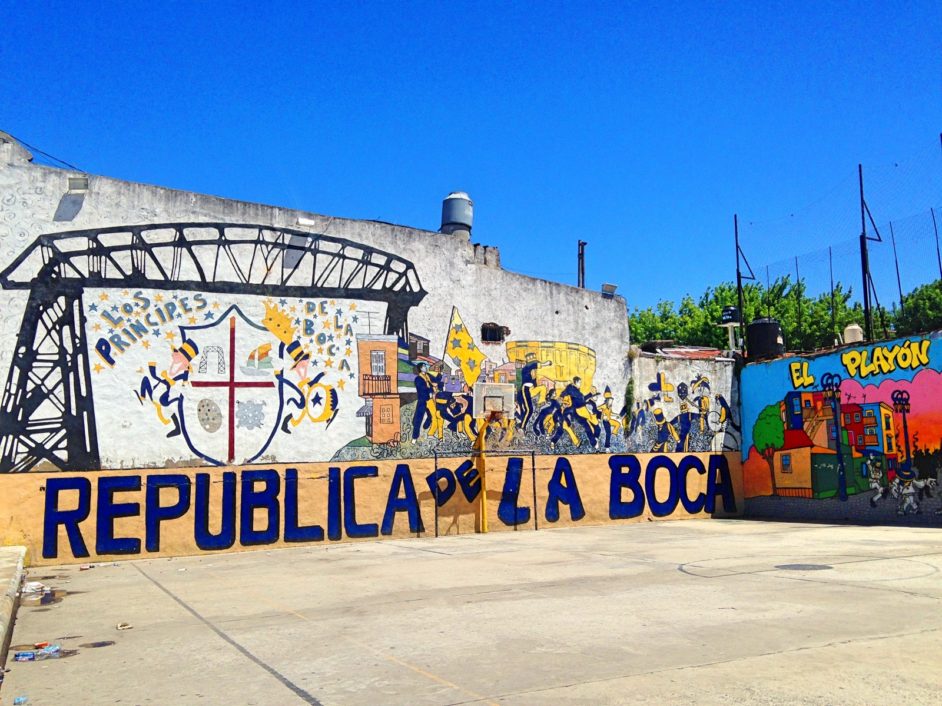 Argentina is by definition the kingdom of football. Argentinians are CRAZY about this sport (our neighbour daily screams just an example). We could not miss to go to  Boca Juniors headqueartes. La Boca is the original district of Buenos Aires located at the port. It became the fisher area and later on when the upper-class moved to the north of the city founding Recoleta district, La Boca became the immigrants district. It is a very colourful and authentic “barrio”. Houses are all painted in different lively colours. It is also referred as one of the most dangerous part of the city, however we felt quite safe there during the day. We sticked to the main path called “caminito”, the most touristic strict of this area. Everywhere you can see reproduction of Maradona statue but also tango dancers. We went until La Boca Junior Stadium since we could not miss the iconic “Bombonera”. If you want to enjoy the full experience, the best way is to go for lunch at “pizzeria banchero” and discover what Italian influence produced: the “muzarella”. It is a pizza kind made of tomato sauce base and A LOT, and I mean A LOT of mozzarella cheese on top. Argentinian also love to share beer together, so for a complete immersion you should order 1L of Quilmes beer and you will fully feel like a local!

Argentina was conquered by Spanish in early 14th Century. Facing a strong resistance and rebellion from the Indigenes, Spanish were forced to leave. Nonetheless, a second military campaign was launched mid of the 16th Century and this time Spanish managed to establish themselves in Buenos Aires, forcing a large Evangelisation of the locals leading to an important genocide of the Indigenes. This is why Argentina roots are a melting pot of cultures mainly coming from Europe. Another origin of this European influence is coming from immigration waves. First one during Argentinian Industrialisation  and the second one after the2nd War. One of the most influential remaining of this immigration is the Italian Culture. People from Buenos Aires (also referred as “Porteños”) have a very specific Spanish accent and tone which is very similar to the Italian musicality. Although in the gastronomy, pasta and pizzas are very much everywhere as well as artisanal gelatos.

5. Recoleta and the Cemetery 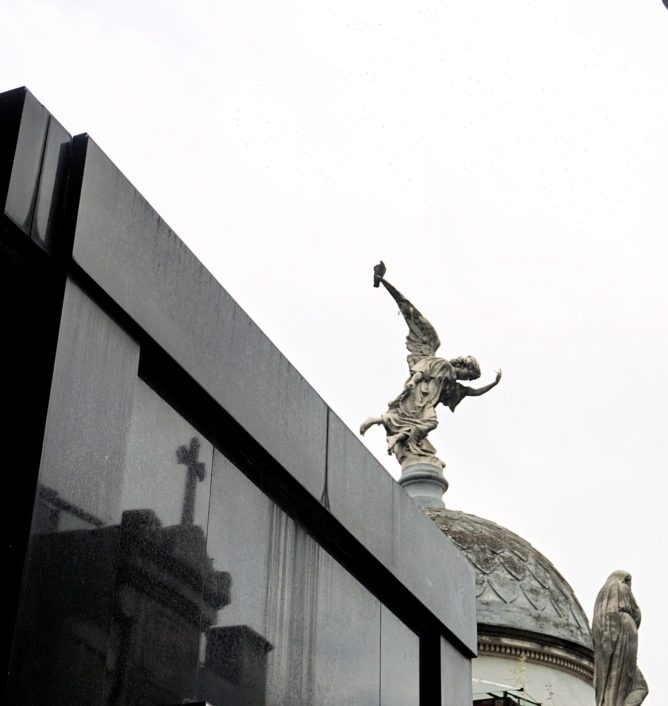 Recoleta is the wealthy neighbourhood of Buenos Aires. Founded by a Franciscan order, it was originally composed by a Church and Monastery. It became the noble district when Buenos Aires suffered a strong epidemic of cholera and yellow fever in 1870. Noble families moved to Recoleta where the height of the terrain reduced the presence of insects which transmitted the diseases. These noble families built mansions and other notable buildings in several European architectural styles of the period. Recoleta Cemetery became public in the early 19th Century. As the area was populated by Noble Families, this Cemetery is mainly composed by opulent Mausoleums and little by little became a very artistic and one of the kind Monument. A lot of notable interment are buried in the Cemetery from illustrated writers, physicians and politics to influents members of the Argentinian Society. 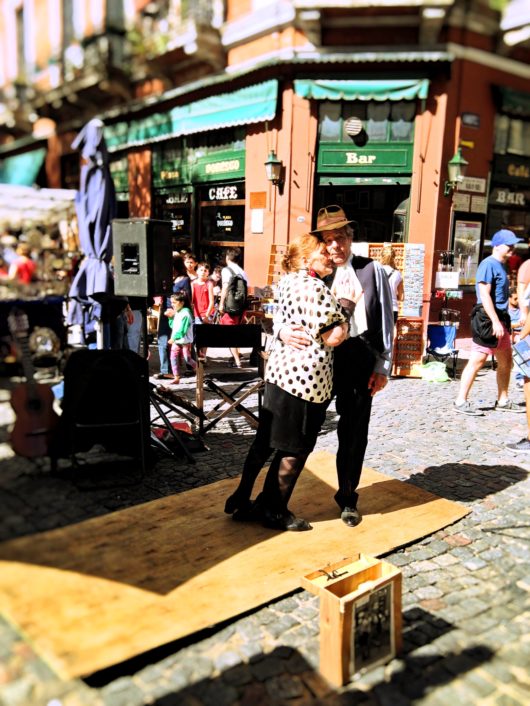 It is the oldest and also most versatile district of Buenos Aires. Known originally as the dockers and brickmakers district in the 17th Century, it developed as the first industrial area of Buenos Aires during the colonial times where goods were storage and manufactured. The first residential settlements in this area were Africans, slaves and free, alike. Mid of 19th Century, San Telmo was remodelled and modernised to encourage and attract mid and upper classes to move there. Unfortunately this project aborted suddenly when the city was stroke by the yellow fever epidemic. After that, San Telmo was deserted and the vacancy of the residences led to develop hosting housing and parks and became a popular place to the immigrants who constantly moved to South America from end/beginning of the 20th Century. San Telmo became the most multicultural neighborhood in Buenos Aires and with the time the most bohemian district of the city. A new generation of artists started to move there and Tango initiated its golden age in this famous part of the city. Nowadays the main attraction beside the architectural sight, is the antiquaires market which takes places every Sunday.

Argentina is also strongly linked to the famous name of Eva Perón. The Peronism has been one of the longest and more controversial presidency of Argentina. It strongly divided and still does, the society of Argentina because of the socialist and also protectionist politics Juan Perón and his wife Eva imposed during the 10 years of mandate. Eva Perón has been the archetype of the 1st Lady because of her poor origins. She was coming from a humble countryside family and made a name when she moved to Buenos Aires to become an actrice. When she married Juan Perón and became 1st lady, she received the disgrace of the upper-class society who never accepted her because of her origins, while the most popular classes provided her an entire devotion. She became and still is a strong symbol now on day.  The city dedicated her a mural that you can see on the facade of the “Edificio de Obras Públicas”.

8. Palermo or the NY of South America

The most popular district of Buenos Aires Palermo. Divided into 7 sub districts it combines residential area with green extended parks as well as the trendiest restaurants, bars and designer shops. It is often compared as the little NY since it has the biggest parks, Palermo Soho and Palermo Hollywood. We were staying there and it is a really nice area which offers plenty of choices for shopping and going out. One of the typical places which attracts a lot of people is the speak easy, secret bars which are accessible only IF you know the password!

The emblematic square was built in the late 19th Century to unify the main points of the city “Plaza Mayor” and “Plaza de Armas”. On the occasion of the one-year anniversary of the May Revolution in 1811, the “Pirámide de Mayo” was inaugurated in the square’s hub, becoming Buenos Aires’ first national monument. It is now on day internationally famous because of the movement of “Las Madres de la plaza de Mayo” created in the 70´s as a protest of mothers who lost their child during the Dirty War (military coup d’état against Perón). People accused of being supportive of socialist believes would be illegally detained, subject to torture, and killed. As a protest Mothers looking for answers after the disappearance of their child took advantage of this symbolic Plaza to openly denounced the military regime practices by walking in silence around the Pirámide carrying a picture of their child. 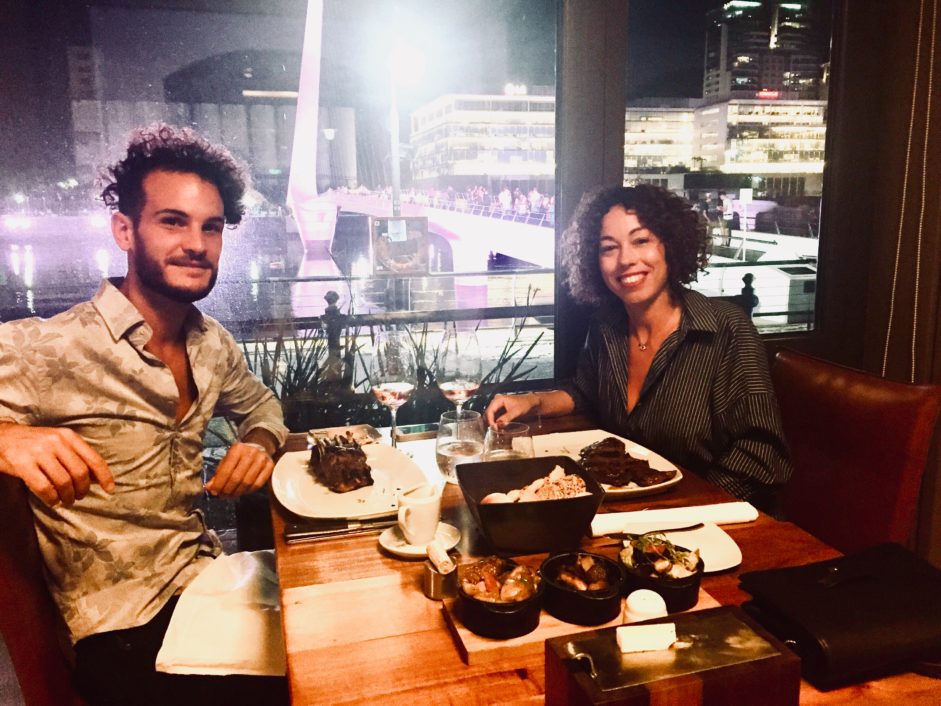 At the end of the 19th Century, Buenos Aires decided to develop a new port which would give larger boats a direct access to the City. Eduardo Madero develops the project. The port was active for some decades but became quickly obsolete because of the appearance of larger cargo ships. With the time and the inauguration of the new port of Buenos Aires in the early 20th Century, Madero port became a degraded and underdeveloped land of old warehouses. After several proposal to urbanise the old Port, Puerto Madero finally experienced a new birth and now hosts the most prestigious and luxurious hotels, restaurants, universities, galleries and Universities. We enjoyed an early Christmas Celebration at “Le Grill” refined parilla restaurant enjoying the stunning view on the Port.