Hanoi is a vibrant busy city. The peculiar character of this capital could be defined through the constant myst, the numberless scooters, street food at every corner and the french architecture heritage. It’s also a controversial city which procures to anyone who visit it two reactions: either you like, either you hate it. Personally, we really enjoyed it. Hanoi has been the most important political center of Vietnam for a very long period. It is now the capital of the country and counts with 7,7 Millions of habitants. The structure of the city as well as its architecture still shows the heritage of the French occupation from 1883 to 1945. When it comes to Hanoi, there are plenty of options to visit and seek around. From museums, temples or street foods, you will not get bored in Hanoi. Here is our ultimate guide to enjoy Hanoi for few days and love it as much as we did during our 5 weeks itinerary of Vietnam. 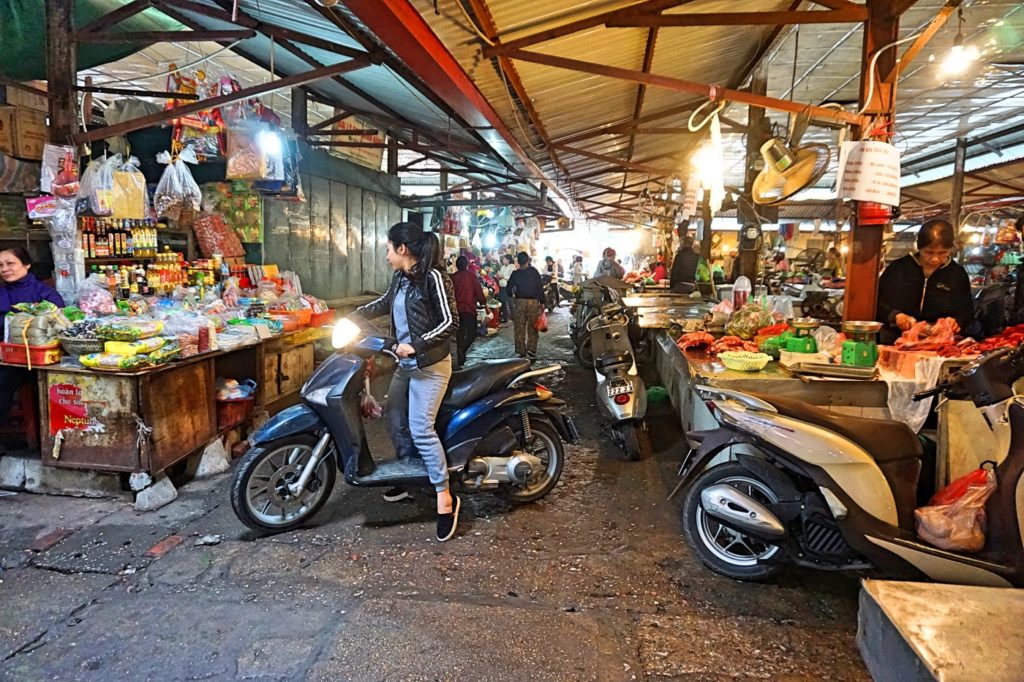 First of all you should know that Hanoi is a very busy city. Vietnamese can’t live without their scooter and the traffic is heavy and can be scary and invasive for anyone not used to this environment. If you want to not suffer too much from this we would suggest you to do as we did and experiment it on the bright side by being ironic of the situation. Just breath and appreciate the contrast of Vietnam with your country. As an example, we started to imagine how a Vietnamese would feel in Switzerland in a very organised, clean and regulated city? Or, we would imagine them sleeping with their scooters as they even go to the market shopping on it! And last but not least do not fear to cross the street just go slowing into the mess and be sure they will avoid you! They are experts and will not strike you on the road! 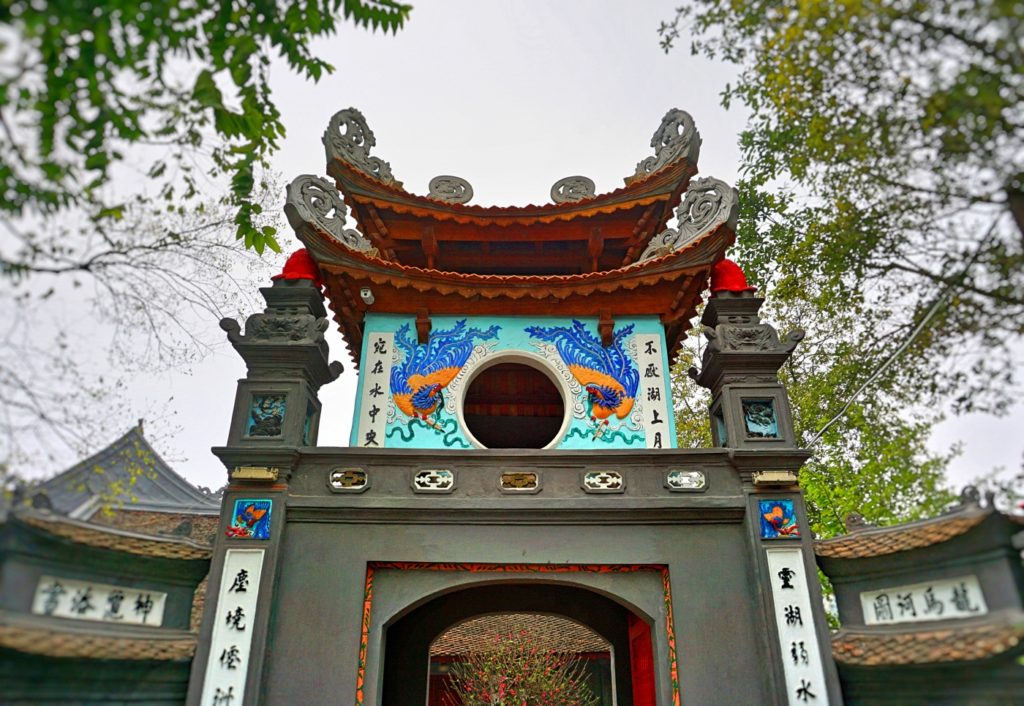 The main Temples and Pagoda are located in the central part of the city around the Westlake and Hoan Kiem. We visited the Pagoda Trấn Quốc and the Ngoc Son Temple. As we arrived in Hanoi few days previous the Têt Festival, which is the new year celebration of the Lunar calendar, the temples were full of offerings to bring luck and fortune for the new year. It was quite peculiar to see bottles of beer, cigarettes, chicken or coca-cola everywhere in front of the Buddha statues. We could also appreciate all over the city a constant show of people burning fake money as a blessing ritual to welcome the new year. Another typical tradition to bring luck around those temples is to purchase a turtle and through it into the lake as a offering to Buddha to bring luck. 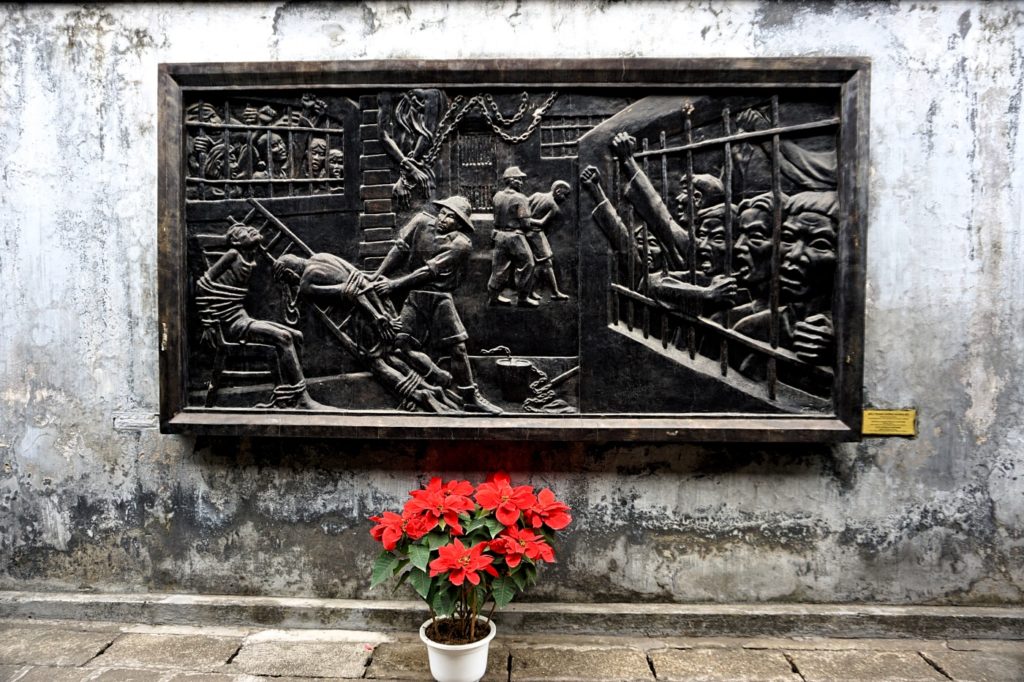 This prison is one of the darkest heritage left by the french colonists. The prison was demolished during the 1990s, though the gatehouse remains as a museum. It has been built during the colonial occupation to host political prisoners. The museum features the room where until 100 prisoners were tight to each other in a such a promiscuity and unhealthy hygienic conditions that those who wouldn’t died would end up contracting diseases. Such inhuman treatments didn’t stop the Vietnamese to keep their faith up and fight against their oppressor. At two occasions prisoners escaped though a tiny drain reflecting the skinniness of the prisoners who would receive a little portion of broken rice as a daily meal. Those who would not managed to escape and rebel against the frenches would suffer torture and execution. The name of the prison reflect perfectly what the prison was as its meaning is “Hell’s Hole” in Vietnamese. Later on used to host the US prisoner during the Vietnam War. Vietnamese treated so well their prisoner that it ironically ended up with the surname of the Hanoi Hilton. 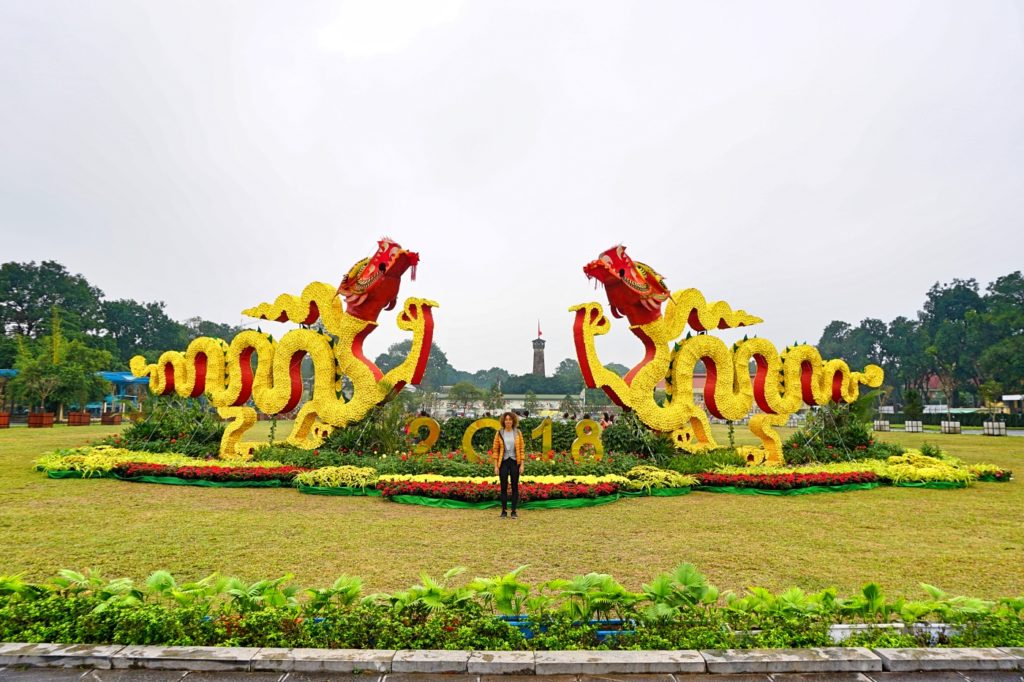 After visiting the Hao Lo Prison, for a lighter transition, you should heap up to The Imperial Citadel of Thang Long located in the very center of Hanoi.  It was first built during the Ly Dynasty in 1010 and expanded later on by the Tran and Le. It saw its end as a royal main residence when the Nguyen Dynasty decided to relocate the capital to Hue. Nonetheless it played another important role from 1954 to 1975 when the North Vietnamese military command had its headquarters within the Citadel. A connecting underground tunnel allowed for emergency evacuation in case of an attack. As we visited it during Têt Festival, the Citadel was hosting a water puppet show that we could appreciate as much as all the kids which were surrounding us amazed but the performance.

Following the Thang Long Imperial City, you can continue your visit to The Ho Chi Minh Mausoleum situated at one block further. It is the final resting place of Vietnamese Revolutionary Ho Chi Minh. The Mausoleum is a large building located in the center of Bas Dinh Square which offers a large esplanade facing the monument. The place is emblematic for the country as it is where Ho, President of the Communist Party of Vietnam, read the Declaration of Independence on September 2nd of 1945, marking the starting point of the Democratic Republic of Vietnam.  You can easily take pictures of the Mausoleum, nonetheless be careful as the strict guards will remind you to not cross the yellow line in front of the building as it seemed to be a restricted area. Nonetheless if you are a group of girls they will be more than happy to let you cross the line to straight the pause with them on a picture! 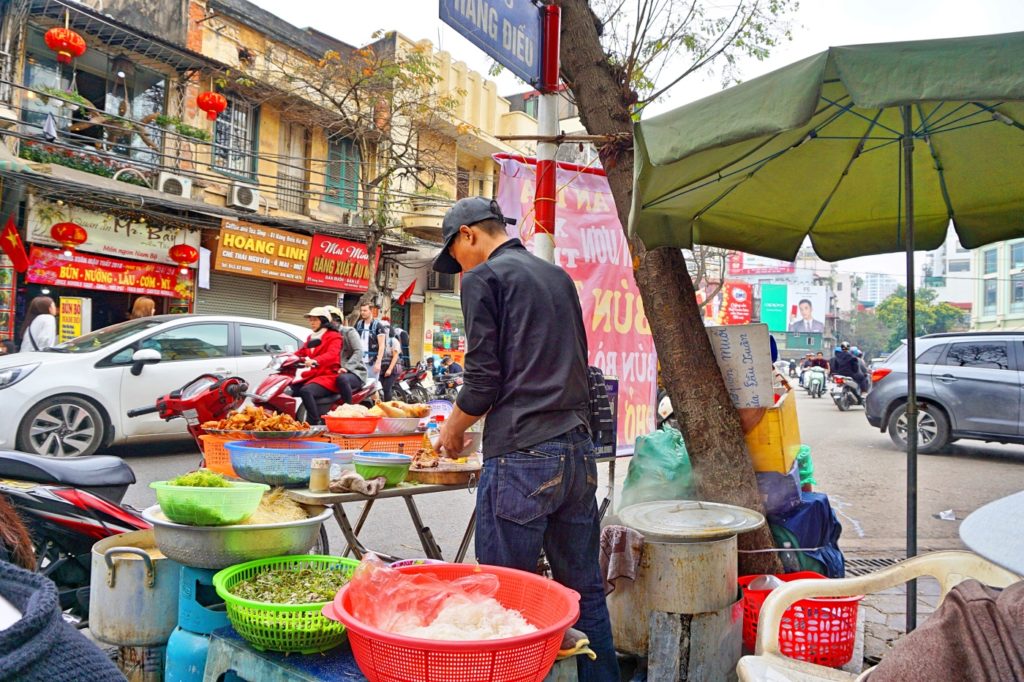 As walking around Hanoi can be challenging and stressful, (Vietnam counting with 80 Mio scooters for a total population of 90 Mio), you will need some breaks to recover from the busy noisy traffic surrounding you. Luckily for you Hanoi is THE street food city of Vietnam! We have been traveling North from south of Vietnam and Hanoi was for us the city where we could find the most of street food options and more specifically the best Pho (traditional noodle soup accompanied by beef, chicken, fish…however our favourite Pho was in Hoi An) or the famous Bun Bo Niem (cold rice vermicelli noodles with a delicious sour sauce topped with fried srping rolls and peanuts). Anywhere you go you will find a corner with tiny little tables and low chairs which could look like playground for kids. The interesting things of Hanoi is that the corners are very well organised as each one will be dedicated to a specific delicacy. Prices also are unbeatable as a Pho or Bun Bo will cost you around 2$. Another mandatory dish to start your day is to try to Bahn Mi. A positive heritage of the French occupation has been the french bread and more precisely the baguette. As breakfast, Vietnamese love to eat a sandwich field with sunny side eggs, creamy cheese, coriander, cucumber and spicy sauce. We tried it several times and we loved it! Accompanied with a Coconut iced coffee and it is the perfect combo to start the day.

We were extremly lucky to visit Hanoi during TET Festival. The Chinese new year, referred to in Vietnamese as TET Festival is the biggest holiday of the year for the Vietnamese and it usually means 10 days of complete vacation during which you’ll have troubles findining anything that is not catered for tourist only open. You need to book your trains and bus tickets well in advance, as even the extra seats available during the festival get sold out very quickly. As we experienced first hand, travelling by trains during TET in Vietnam is particularly charming: entire families are travelling across the country together, notwithstanding the lack of tickets. It won’t be strange to find 6 people sharing 2 beds on a train. But TET festival is also such a joyful event. Streets are decorated in the classic chinese red; fake money are burned at every corner as an offer and homage to loved ones who passed away, fireworks and firecrackers are shot almost constantly and a vibrant market is set up in the very center of the city. On the actual night of the Chinese New Year, everybody gets around the Ho Han Kiem Lake to watch the main firework show organized by the government and the various waterpuppet shows that you can enjoy for free in the area.