Before Vietnam was divided into North and South during the modern part of its history, Hanoi and Hue have been the Imperial epicentre of the Empire. Nonetheless let’s not forget about Hoa Lu in Ninh Binh region which was the capital of Vietnam in the 10th and 11th century. The north part of Vietnam offers the main touristic attractions featuring its glorious Imperial past. After 10 days in Hanoi it was time for us to move further and get into the heart of Vietnamese history. Here is what we discover and what we recommend to visit as we did it in our 5 weeks itinerary of Vietnam. 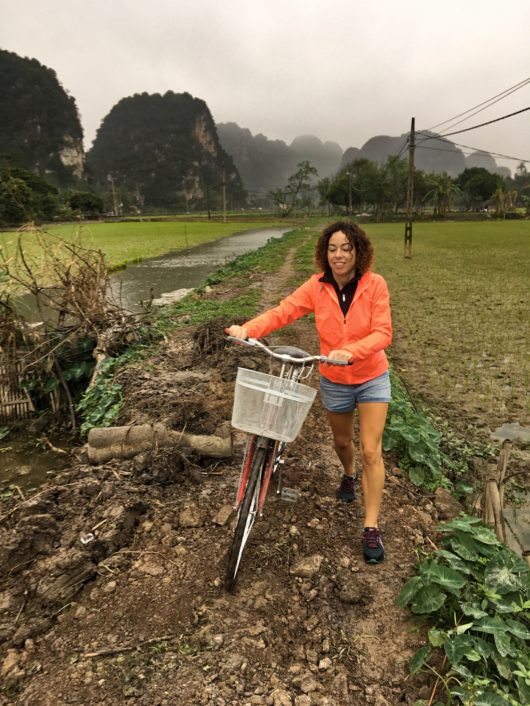 We are no scooter drivers and felt ironic that in Vietnam even kids of 8y old were able to manage this terrific engine much better than we would have ever done. So in order to not risk our lives to prove a point, we decided to go for alternative ways of moving around. We took the train to go from north to south and really enjoyed the journey (to know more about how to book train please read our related article here). It gave us the opportunity to meet with locals as it was the period post Têt Festival and trains were CROWDED with families willing to get back home (read what it means visiting Hanoi during TET festival). In the cities themselves, what a best way than using our legs and walk around. For longer distances bicycles were always a good and easy option giving us the opportunity to work out a bit surrounded by bluffing sceneries. However if unlike us you are able to drive as well as Vietnamese kids, you would like to rent a motorbike to visit some of the main sites (places like Bai Dinh Pagoda or even Trang An) which would enable you to go for a 30km ride per day. 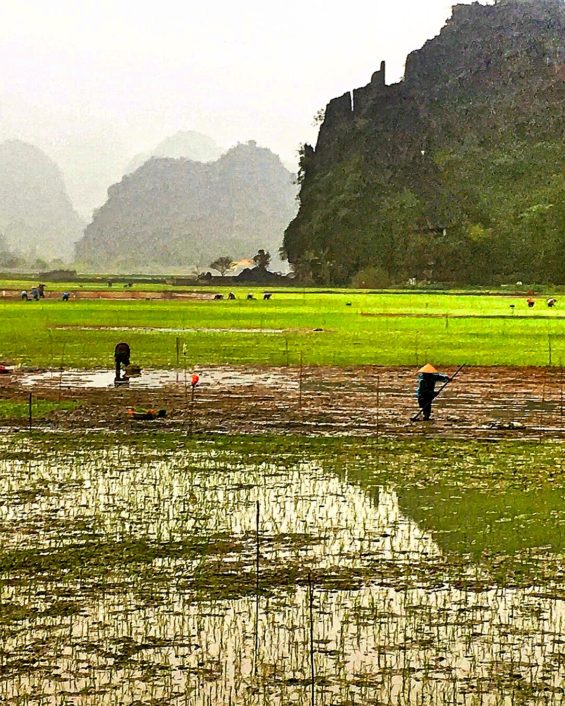 Ninh Binh city, our first stop, is the capital of the province of the same name located couple of hours south of Hanoi. While the city itself is a uneventful place, the region boasts a breathtaking, unique landscape. The Karst limestone scenery is a wonder backdrop which follows you, no matter where you go. You truly feel being in a movie. Many sites of interest are located only within 12km, and as the land is flat, they can be easily reached on a bicycle or motorbike. We arrived end of February and the mist was covering everything. Our first impression of the city and its surrounding was an underneath jewell cover up by a foggy blanket. But even though, we could perceive the stunning nature with endless green paddy fields.

Located at 6km from Ninh Binh, Tam Coc is the main destination for travellers as it is the starting point to visit the main caves and pagodas of this region. If you wish you could take a boat ride on the lake, but we would recommend you to better get lost within the rice fields and local villages by bike. It is much more enriching and quiet experience. We visited Bích Động Pagoda which consists in a set of 3 temples carved into a limestone mountain. At the very top of it you can appreciate a nice view of the luxurious nature. After that, we randomly went around and end up without planing it to Thung Nham Bird Garden. It is a new spot which is quite unknown by visitors and it’s a shame as it’s a beautiful quiet piece of Nature. Thung Nham looks like a stretching valley, bending over the limestone-mountains covered by natural green tropical forest. The park has several caves and hiking trails. It is the perfect place to get a bit of fresh air and go on a relaxing walk. It’s just 5km from Tam Coc center. While many people chooses to get accommodation in Tam Coc to be the closest to the main sites to visit, we opted for a Homestay which was on the main road connecting the train station and the way to go to Tam Coc. It was a perfect compromise to still have the convenience of not being too far to get our train and still on an easy way to Tam Coc. It also gave us the opportunity to be still see Ninh Ninh center and get some delicious street food which was extremely cheap if not the cheapest we got in Vietnam! 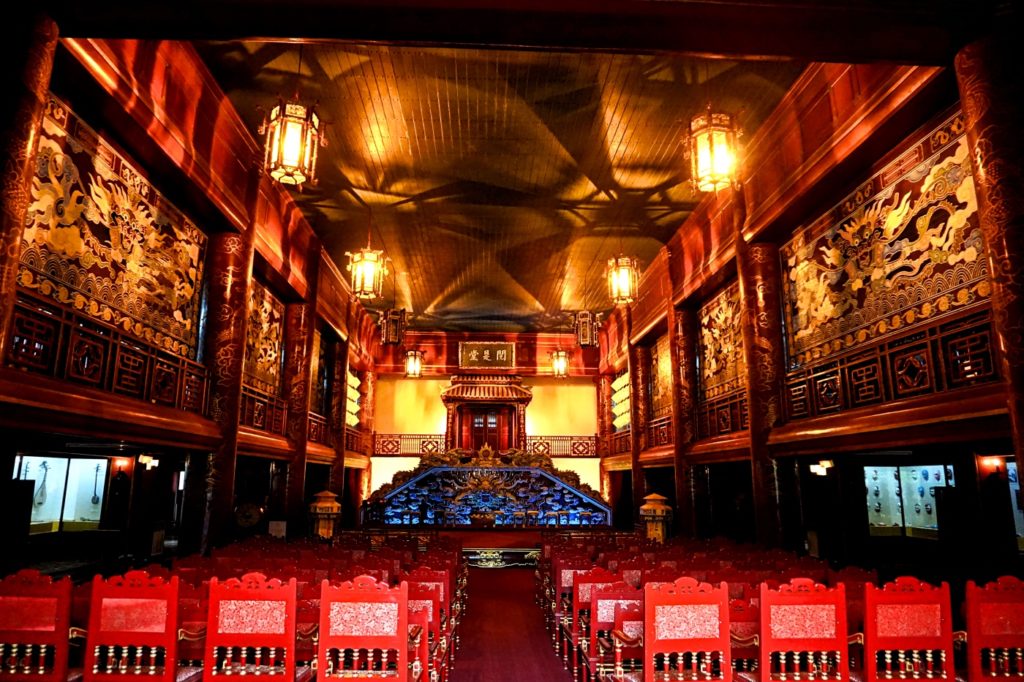 Huế  is located in the central coast of Vietnam. It is a 10 hours drive from Ninh Binh, or 12hours from Hanoi, and it was the seat of  Nguyễn Dynasty emperors from 1802 to 1945.  We took a night bed train to get there from Ninh Binh (12hours journey). Da Nang an Hoi An (check our guide here) are just behind a mountain. We were smarter though this time and didn’t get the very top beds of the cabin. You are probably wondering why? The higher you go in the bed cabin, the lower the price is but most importantly the space! The very top bed is made for thin contortionist as you can’t even seat. Getting up and down from there can become a little bit challenging. We arrived in Hue in the very early morning. As it was a rainy, cloudy day, we decided to hang out at he city center. It isn’t very extended and you will find couple of streets featuring art craft shops and eateries from western food to local dishes and street food. On the evening we were there, there was a street festival celebration with DJ and the evening turned out to be very lively. The center also offers couples of good SPA for good quality price massages, and it is the perfect alternative if the weather is bad.

As we got only one day and half, we opted to visit the major attraction, the 19th-century citadel. It is composed with the Imperial City, the Forbidden Purple City, which was once the emperor’s home and last but not least replica of the Royal Theater. It is an impressive site to visit and we were really surprised by the way it has been preserved. It’s a quiet place and despite some visitors around, we could really take our time and also quietly take picture without being surrounded by the crowd. When existing the Citadel, there is a parcel which features old tanks and helicopters from US army. The city of Huế was also the battleground for the Battle of Huế, which was one of the longest and bloodiest battles of the Vietnam War. If you wish to spend more time in the ancient capital of Vietnam, another popular touristic attraction is  the tombs and pagodas which lie everywhere in and around the city. Those with an endless  curiosity for culture could easily spend all days of an entire week to see them all. However majority of travellers are usually satisfied with just a couple of them.

A Guide for Hanoi & TET Festival

Hoi An Guide for Tourist