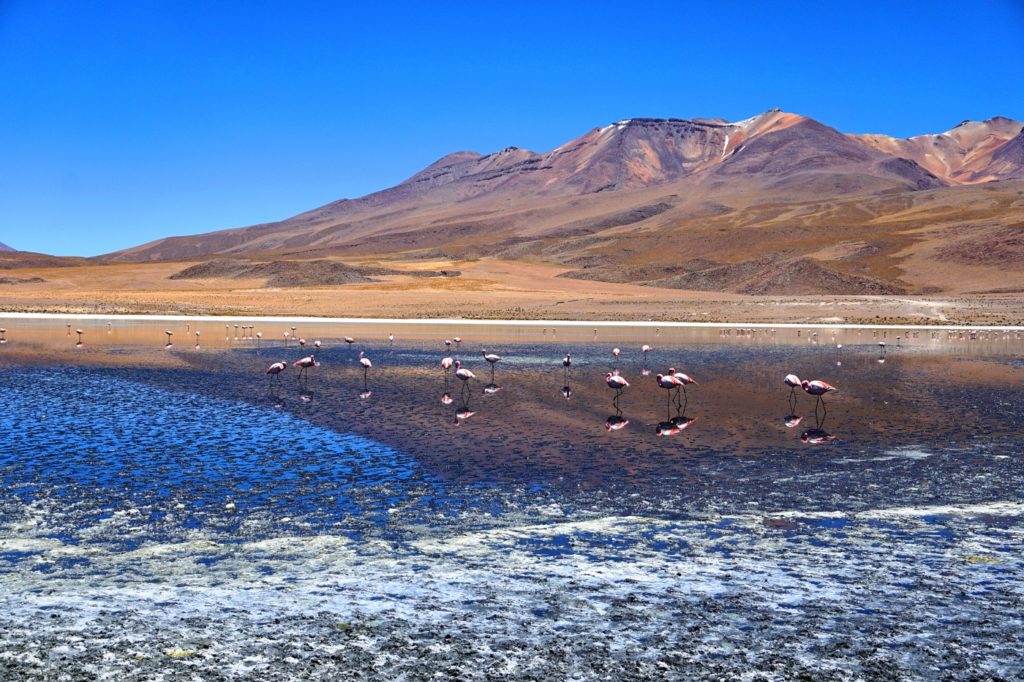 After our first magical day within the wild white Salar de Uyuni, we experimented new landscapes for our last 2 days. We went to see the lagoons with their legendary unique colours and of course their flamingos.

Here again we were amazed by the huge variety of nature features. All the lagoons are different and reflect colour in an unique way. The flamingos were majesties in the middle of a water mixing ocher, black, blue.. the most we were looking at it the most difficult it was to distinguish the water from its sky reflection. The lagoons were part of a unique scene where there was no more horizon neither earth or sky. They belong to each other, there was no gravity or line between them.

The desert was also changing. We came from a infinite white  landscape covered by a crack ground like if the earth wanted to 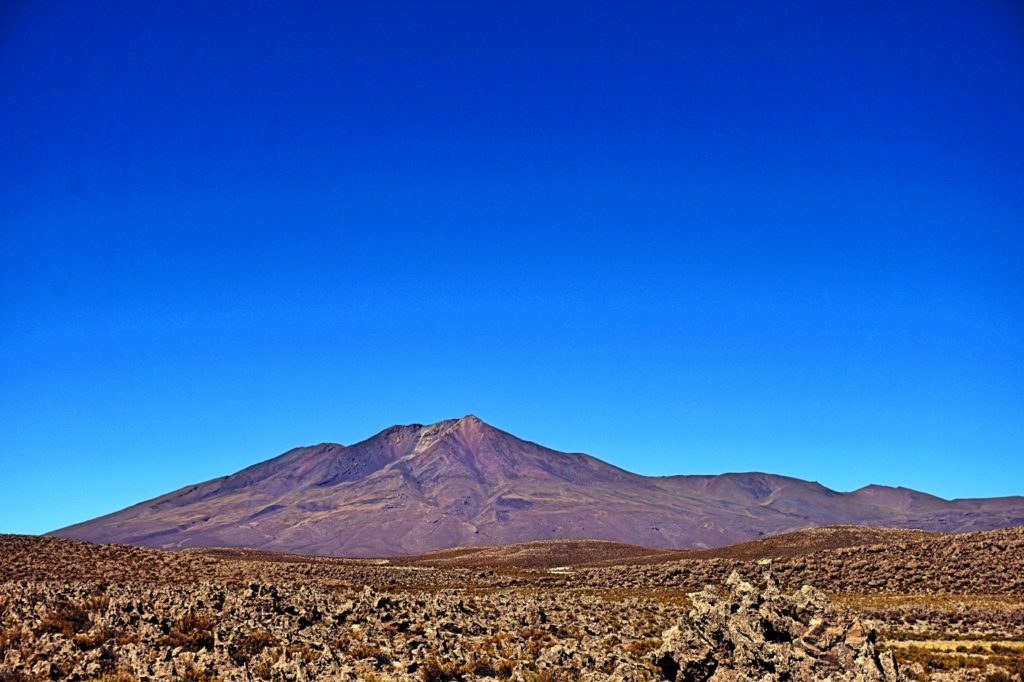 change her skin, to an arid scenery with coral rocks everywhere with an imposing Volcano on the background. When we got to the third lagoon it was even more impressive. We have never seen such a mix of color. It was like having a painter color palette just in front of us. The perfect blue sky was reflecting on the water mixing up with the reddish and pure white salt color. You could also see green and grey ground here an there. It was for sure the purest beauty we could see so far.

On our second night we stayed in a hostal at the edge of the Salar. We decided to try some Bolivian wine and it was really disgusting!! After some beers and “wine”, everyone was a bit tipsy and we spent a fun evening with our traveling companions. Some of us decided to step outside the micro village to go look at the stars. Again the sky was covered in Stars. It was one of the most impressive view we all have seen. 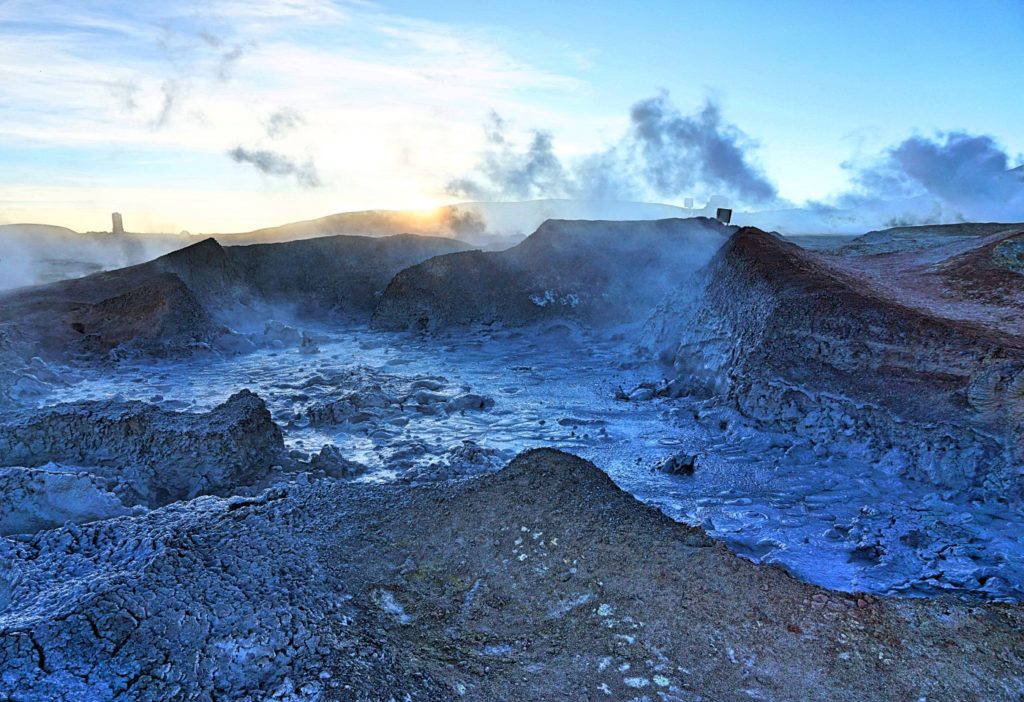 The morning after we woke up at 4am to go see the geyser in the very early first lights of the day. We will never forget this scene. It was an epic moment. Despite the heavy wind, everyone wanted to stay longer to obverse those peculiar formations. It felt like being in a spacial movie when the explorers arrive on a new planet. There was a heavy white smoke, greyish, greenish ground bubbling mud. 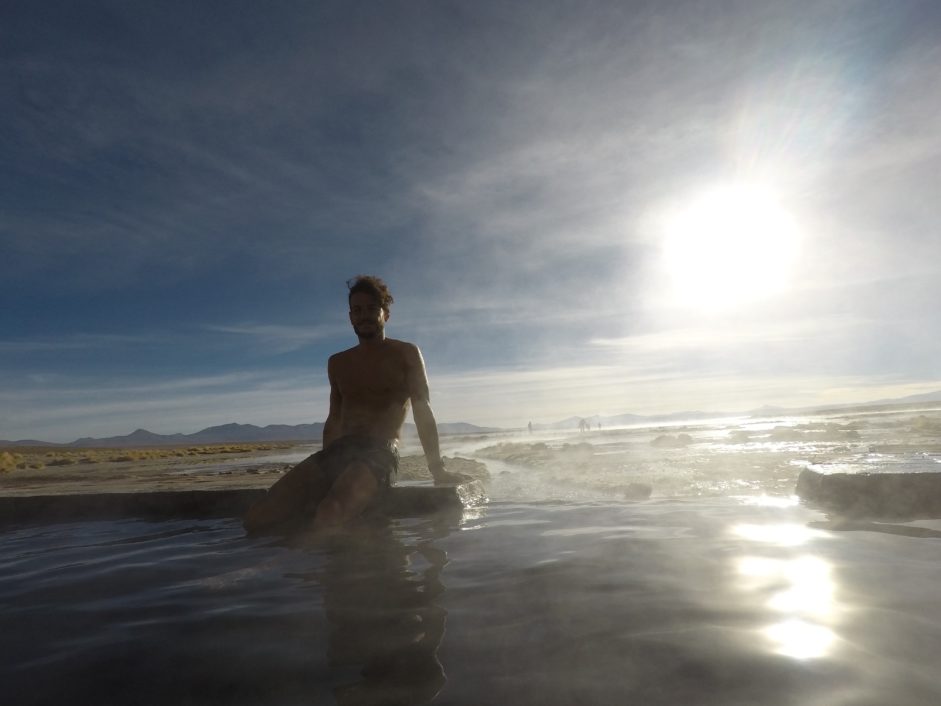 The wind was ice, we were all freezing, but thankfully our next stop was the Hot Springs. Even if we were tempted by the idea of a hot bath, the thought of getting off our clothes to get into the water was challenging. After a moment we finally decided to give a trial and it was amazing. Being in this hot warm bath, seeing in front of us a beautiful lagoon in the early sunrise lights and the flamingos shadows drawing in the horizon, we were speechless. Everyone was here quiet admiring this perfect moment when the emotion is so intense, that no-one could describe it. 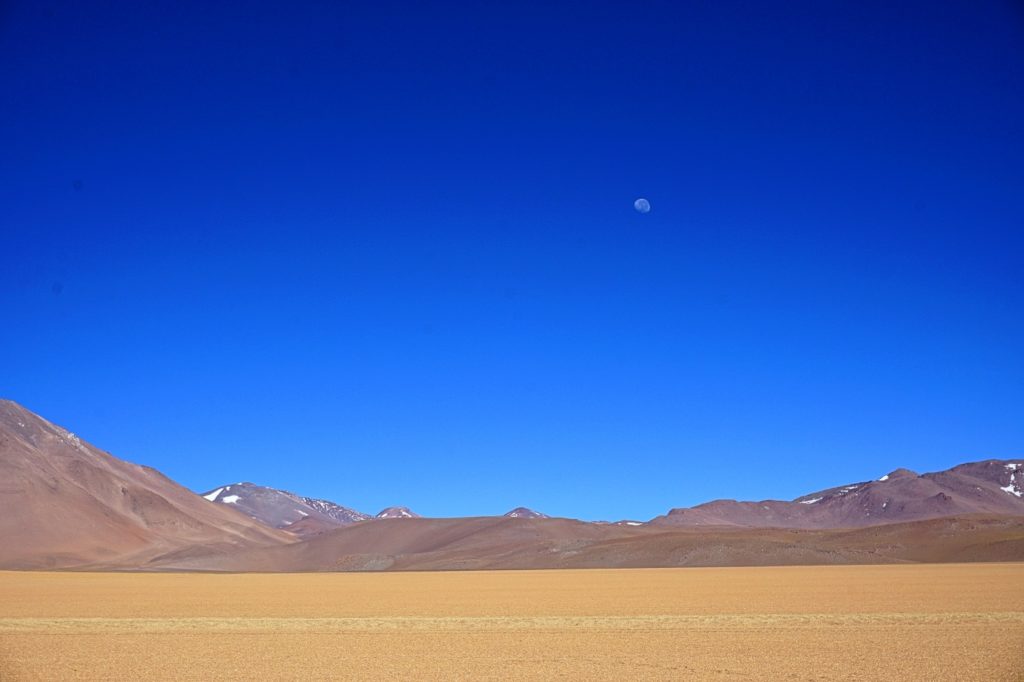 After that, we hit to road in direction of the “Dali Desert”, a small part of the desert where there are stones here and there which are compared to a landscape that Dali would have paint because of their particular shapes and positions. The sand was real orange there and the most impressive part was to see a clear moon dressing up in the sky on top of the mountain. She was there defying the burning sun on our back proudly dominating the white peak of the mountain. The perfect blue sky contrasting with the moon and the degrade of white, grey and red of the mountain was the real paint. It was an unreal picture like if someone really did paint it there.

We finally reached the master piece of this 3 days tour, the Volcano. We could see it for a while already. It is such an imposing piece that we always got this inexplicable feeling that it was obverting us this all time. It raises here in the middle of two minor mounts like two safe guards protecting him. Their base were two extended arms forming a barrier at the base of the Volcano defying anyone to dare crossing it at their own risks. And here at the bottom of it, a magical lagoon surrounded by a white hallo marking the path people shouldn’t cross. Its pure green color were combining perfectly with the reflection of the Volcano conferring it even more imposing presence. It was clearly the guardian of this majestical temple which no one should ever touch but just feel lucky enough to admire.