The Cemetery of the wealthy Recoleta district, Buenos Aires, offers not only remarkable hosts but also some surprising stories. Originally founded as the garden of the Franciscan convent “Los Recoletos” in the 18th Century, it is converted into a public cemetery when the religious order was disbanded in 1822. In 1882 the Cemetery was remoulded due to its new upper society neighbourhood. In 1870, Buenos Aires suffered an important epidemic of yellow fewer forcing the richest who could afford to move to transfer to Recoleta. In order to fight against the propagation of the epidemic, the cemetery of Recoleta is remoulded and the bodies removed from the under ground to not contaminate the water and the cultivations.

Due to the changing origin of people buried in the Cemetery, the new design is oriented to a more sophisticated architecture. Upper class facilities built ostentatious mausoleums. The particularity of this Cemetery is that the coffins are not buried under the ground. They are displayed visibly inside the mausoleum and any visitors could see them through the front doors. You would probably think that it would be smelly or also dangerous if the coffins breaks?  Nonetheless, they thought about it and the visible coffin is just an upper cover. The body is actually buried into a second coffin covered by a thick copper layer in order to avoid any smell or breaks with the time.

Among the families buried at Recoleta, we could find notable names of artists, military, politicians, physicians and sportives from the Argentinian Society. Some of them have incredible stories an here is a selection of the most peculiars one. 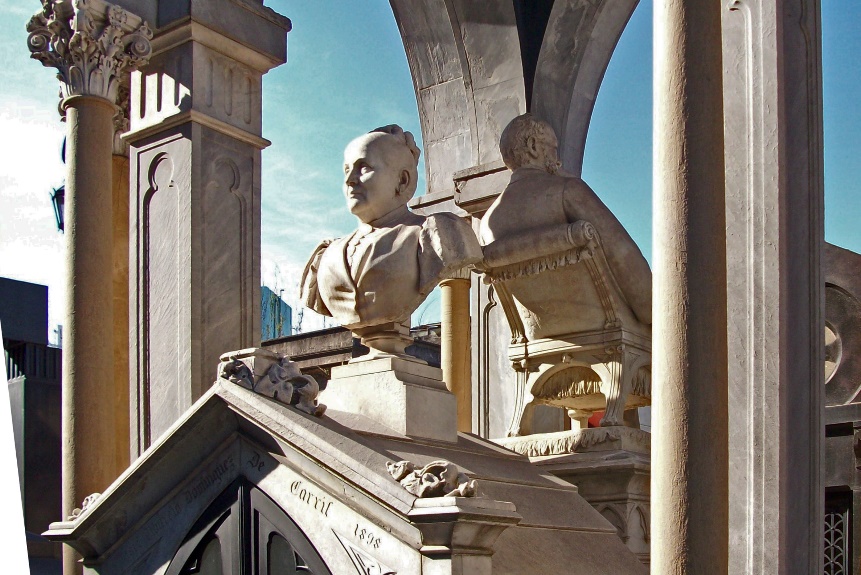 Salvador María del Carril was an important figure of the high society of Buenos Aires in the mid of the 19th Century. Well known for his academic and politics success and achievement, he was unfortunately for him although known for his marital issues. Salvador María married a young woman (25 years younger than him) names Tiburcia Dominguez. She was a very social active woman and embraced her new marital paper so deeply that she started to spread her husband money in any shop of “haute couture” that the city could offer. Despite the warning of her husband to stop this behaviour, the smart young lady took advantage of her husband reputation, opening credits in any shop of Buenos Aires. When the tremendous depts were claimed to her husband, this one did the most outrageous thing than a woman of this time coud suffer. He commanded to publish an article in the newspaper informing the shop owners of Buenos Aires than from that day no credits under his name would be honoured. Turbicia furious of this social death incremented by her husband decided to never talk to him again. They spend the rest of their lives without exchanging a word and when Salvador María died, she commanded to build an expensive and majestical mausoleum in Recoleta Cemetery. As an ultime revanche, she commanded that when she would died, her bust would be built back to her husband’s with a radius smile on her face. 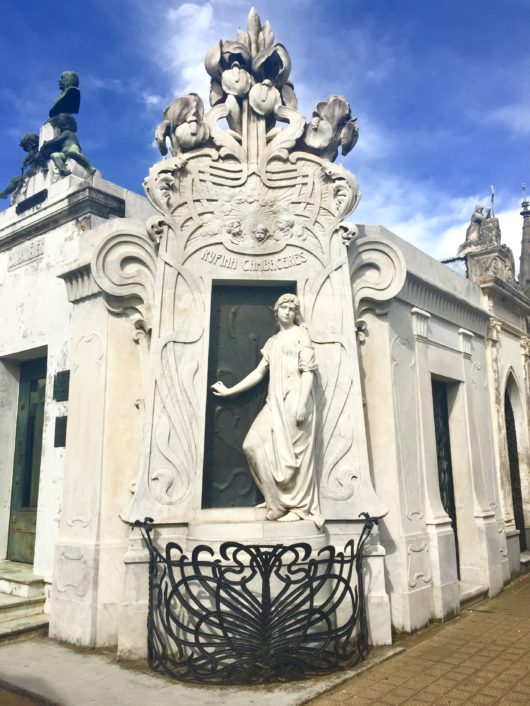 Once upon a time, a very beautiful lady, with a tragic destiny was born in a wealthy upper class Family. Her name was Rufina. She was born to be as beautiful as talented than her father was. Her father, Eugene Cambareres, accomplished author of Argentina, could have not been more proud of his daughter, if only he would had still been alive to see her growing. As she grew up raised by her mother in a beautiful house within the richest society of Buenos Aires, she had it all. She was known as the most beautiful but also ingenue girl in the city. Her beauty was as renown as her kindness. She had found the love of her life, at least as she thought, and was about to celebrate the most important step of her young existence, her 19th birthday. Her lovely mother set up an impressive celebration at this occasion. The pre evening party would count with the more honorable members of the high society and it would be followed by a function at the Teatro Colón.

While Rufina was getting ready for the unforgettable night of her life, touched by her mother attention but also thankful to be so gifted, one of her best friend revealed her a very dark secret. This secret seemed to have been known by anyone expect Rufina herself. Her lovely mother, Luisa, was having an affair with her Fiancé! Devastated by the news, she sent her friend away, and while she was alone in her room, still under the shock of this unexpected revelation, she could felt her heart broken into tiny little pieces. The pain was so unsustainable that she collapsed into a deep coma.

When they found her lying on the floor, 3 doctors were summoned to examine her but all of them agreed on a same diagnostic, Rufina was dead. Her mother, to avoid a scandal, organised a quick funeral and ordered that Rufina would be buried at Recoleta cemetery. While Rufina body was placed into her mausoleum few days before the official funeral, the guardian of the cemetery came to check if everything was in order. The day before the ceremony the guardian noticed that something was off. Scared of a robbery, he ordered to open the coffin to check if everything was fine. This is when horrified he discovered scratchmarks  in the lid, and all over Rufina’s face. The official story at the time was that the coffin had been raided to remove the jewels the body was wearing. But the truth is that Rufina was buried alive after suffering catalepsy. She woke in her coffin and tried to escape from her prison.

As her lovely mother was being consumed by the guilt of what she did to her daughter, she commanded to build a statue of Rufina at the edge of a door. No one knows even nowadays if Rufina is opening or closing this door as she would still be trapped into the limbo of her own tragic death. 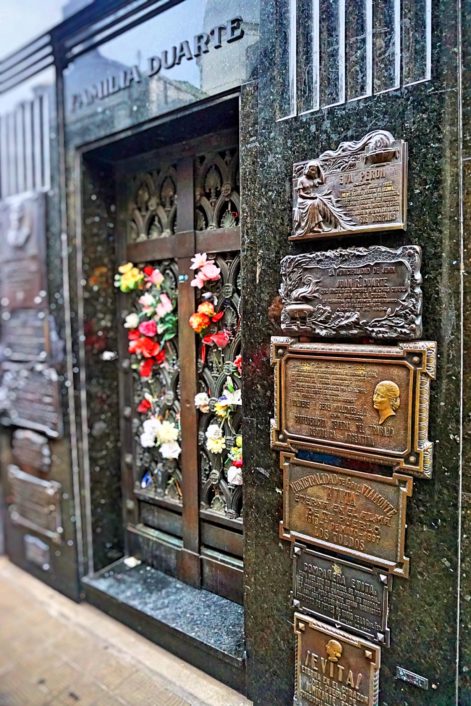 This story is one of the most famous and impactful of Recoleta Cemetery. Eva Peron is the main reason why tourists ran to Recoleta to visit her tomb. She has been and still is one of the strongest figure of the Argentinian Political history. While she has been and still is adored by millions of Argentinian, mainly from the low-class society, she also has been and still is hated from the upper-class society. Her humble origins made her the perfect figure to represent the oppressed mass of workers who needed attention and hope to improve their living condition. Eva embraced her role perfectly until even getting more popular that her husband, the actual President of Argentina, Juan Domingo Peron. Eva died at the age of 33 years after suffering a cancer of the uterus. It is said that the night of Eva death while her favour admirers were crying their loss, the people against her celebrated her death opening champagne. Eva after life had been a remarkable odyssey as her corpse suffered a macabre and unbelievable path.

After her death in 1952, opposition military party gained more power as the main Figure of the Peronism disappeared. President Peron had to leave urgently the country, while military leaders organised a coup d’état. His quick escape unable him to make proper arrangement for her dead wife body. Militaries determined that they had to keep Eva Peron’s body from opposing political forces. Eva even dead was such a symbol still, that the militaries thought that if the Peronists got hold of the body they would lead the masses. This is why the Militaries stole Eva corpse and exposed it in a number of military installations in Buenos Aires, as a strong warming to anyone who would try to defeat them. As it became more and more difficult to remove the rests of Eva around Buenos Aires, in 1957, the military put the body on a ship bound for Italy where it was buried under a false name “Maria Maggi”. It remained here for practically 20 years.

In 1971, when the military got destitute and country wanted ex President Peron back, the body was finally removed from Italy. It was exhumed from a small cemetery near Rome and transported in a silver coffin to Juan Peron’s villa in Madrid. Mr Peron has remarried a young actress called Isabel. They decided to keep the body in an open casket on the dining room table of their villa. Isabel was a very spiritual woman who believed in energy and was a fervent admirer of Eva. It is said that she has been practicing rituals every night laying on the silver coffin of her husband dead wife to acquire the strength and energy of Eva.

In 1974, after the death of Juan Domingo Perez, Eva Peron’s body was brought back to Argentina by Isabel. In 1976, her rests finally found peace as the body buried in the Duarte family mausoleum in the Recoleta Cemetery in Buenos Aires.