Running in Rio de Janeiro in January is a though challenge! It’s so hot and humid that you really struggle to keep up with your usual pace. And you have just a couple of routes that you can follow, as the rest of the city streets are totally off limits for runners. But those routes are really good, albeit for different reasons.

My XiaoMi Amazfit got broken, so I run most of the times without a proper tracker. I took my phone only on 2 particularly nice runs that i wanted to record nicely.

The route I run the most is the famous Lagoa, a 7km loop around the small lake between Ipanema and Botafogo. The course is marked every 100 meters, so it’s perfect for running without the help of a gps tracker, you have plenty of refreshments points (fresh coconut yummy!) and even some shadow. On the negative side, you run next to a very busy road and sometimes the lagoon smells. The track is packed with joggers, runners, walkers, bikers, up to you to decide whether you like it or not.

Besides the following runs I also registered at a gym, OX Fitness, near the Botafogo beach. They have a very convenient 2 weeks plan with functional training classes, good machines and clean premises. I did some occasional runs indoor as well to escape the summer heat, but I did not record them.

My runs around the Lagoa

Running near the beach

The second and maybe even more popular location to run in Rio is at its incredible cost line. Most people just run along the 5km strip at Copacabana, and some people adventure till Ipanema. but the real deal is running all the way to Gavea! The road is spectacular, passing some cliff on a perfect walk path that gives you amazing glances of Rio beaches, favelas and mountains.

I have 2 runs recorded properly. The first one is a midday crazy run with 35 degrees and a burning sun from Botafogo beach to Ipanema following all the city costline; whilst the second was a my last run in Rio and I pushed it to 25km, all the way from Botafogo to Gavea and back.

Check out the pictures in Strava because they really are breathtaking! 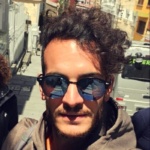